Make the most of your camping holiday to visit Bayonne, the capital of the Basque Country. Bayonne is a city of art and history with a wealth of food and festive traditions whose casual lifestyle, unique architecture and 2000 year old history you'll love. A hub of Basque culture just a 1.5 hr drive from our Camping Club Marina Landes!

The ramparts surrounding Grand Bayonne make for a lovely walk. The fortifications were built in Roman times and revived by Vauban in the 17th century to protect Petit Bayonne on the other side of the Nive. The Roman towers, ancient bastions, Porte d'Espagne, Porte de Mousserolles and its drawbridge, Château Vieux and the Citadel are in amazing condition and encapsulate the importance of the medieval city over the centuries.

Sainte-Marie Cathedral and its cloister

Sainte-Marie Cathedral is a Gothic-style UNESCO World Heritage site built between the 13th and 16th century on the site of a Romanesque cathedral that burnt down (1258). It is topped by two 85m high spires that were added in the 19th century and reigns over the heart of the old town between the Nive and Adour.
Inside you can see the Châsse de Saint-Léon, 9th century bishop of Bayonne, an amazing painted keystone in the shape of a ship (14th century) and stunning Renaissance stained-glass windows from the early 20th century. Neoclassical paintings by Claude Joseph Vernet stand in the choir. Unmissable: the cathedral's cloister (14th century) is one of the biggest in France. The galleries are home to tombstones and tomb niches, some dating back 700 years.

Petit Bayonne is the city's most iconic neighbourhood. It lies in the heart of the city and reaches out to Saint-André Church via Château-Neuf and Saint-André yard where Basque pelota matches are played. As you stroll around you'll love the lively little shops, art and design galleries, bars and restaurants that bring the area to life. If you love art and history then be sure to take a peek at the 16th and 18th century houses lining the Corsaires and Galuperie docks.
A trip to the Basque Museum, the only ethnographic museum devoted to Basque culture in France, will tell you more about the country's customs. A little further away, the Bonnat-Helleu Fine Arts Museum is home to fantastic archaeology, painting and sculpture collections from the 14th to the 21st centuries.

Château-Vieux is a medieval military architectural gem and fortress dating back to the 11th century. The building is now owned by the French army and houses the Naval parachute infantry's first regiment. Bayonne Tourist Information provides guided tours. 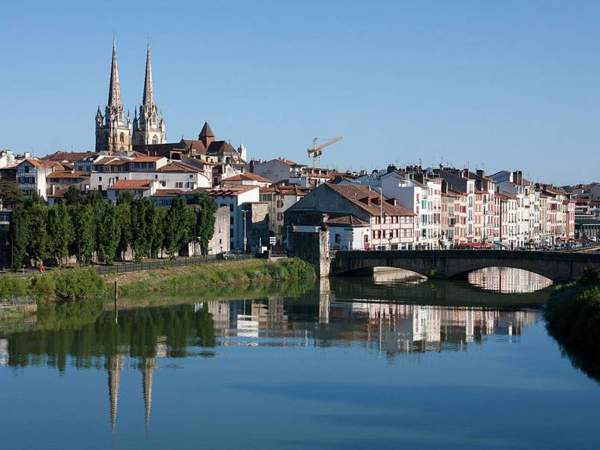